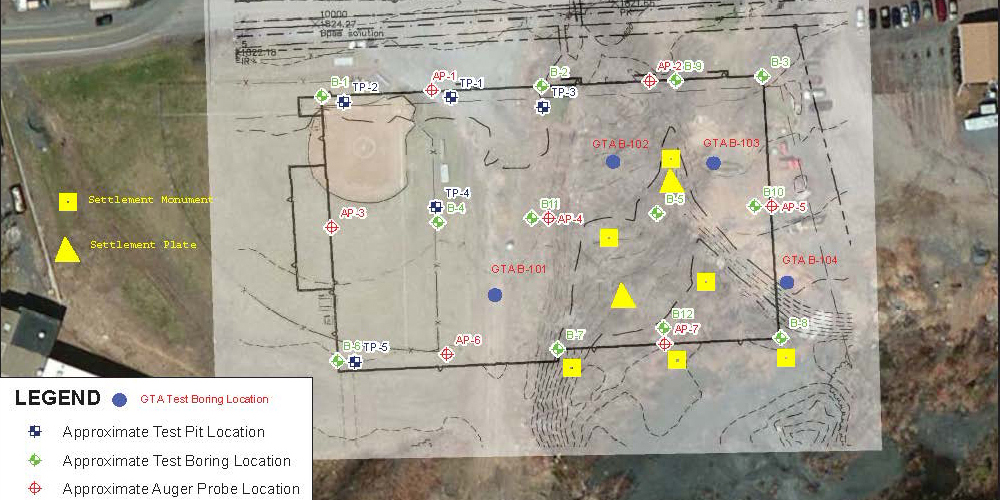 GTA provided value engineering services for the foundation design of a heavily loaded concrete building that is used to process and cure specialty meats. Column loads for the two-story, concrete building were estimated to be up to 1,600 kips, largely due to the weight of the meats hanging from overhead racks.

The site of the proposed building was planned to span across a site that consisted of dense residual soils and rock on one half, and a 23-foot-deep ravine on the other. The ravine had also been subjected to years of uncontrolled dumping of soils and rubble. A critical aspect of the structural design was to provide a foundation which would support the heavy column loads, while minimizing critical total and differential settlements across the building footprint underlain by variable materials.

GTA analyzed the use of auger pressure grouted (APG) piles, drilled shafts, and footings supported on rammed aggregate piers (RAPs). APG Piles were ultimately found to be too costly, and had the potential for being difficult to install through possible rubble fill areas. The owner and design team selected the rammed aggregate piers, which were found to be able to be installed at about half the cost of the drilled shafts, and in about half the time. RAPs sometimes called intermediate foundations, are considered a ground improvement method that increases the stiffness of the underlying soils to allow the use of traditional spread footing foundations, where heavy loads and strict settlement tolerances are involved. Various techniques may be used to install RAPs, but generally the piers are constructed by first excavating a vertical shaft within the soils by auger or vibratory probe, and then backfilling the shaft with compacted crushed stone. The process both improves the density of the surrounding soils by the lateral effect of stone compaction, and also creates stiff, vertical elements below the footings. This combination creates a relatively uniform, very stiff layer of soil within the zone of pressure influence of the overlying footing.

Approximately 560 RAPs were installed within about a two week period.