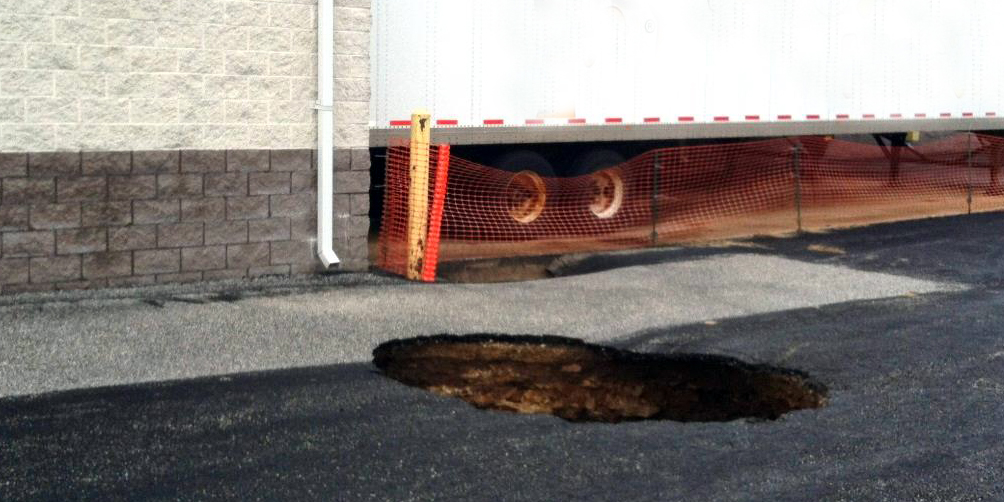 The sinkhole at an active retail toy store was discovered by store employees after a tractor trailer collapsed the pavement surface adjacent to the loading dock. GTA was contacted for consultation, and upon initial observation, it was discovered that approximately 400 square feet of the two-bay, concrete loading dock apron was also undermined by the sinkhole. The sinkhole was encroaching the adjacent building footings. The loading dock was immediately shut down, requiring employees to unload the trailers by hand through the access doors.

As the owner was anxious about the rapidly approaching holiday season, GTA recommended a temporary solution to backfill the void below the loading dock, allowing the trailers to be parked safely. Once the busy season was over, GTA prepared a subsequent plan of compaction grouting. Compaction grouting entails the drilling of hollow steel pipe below the ground surface, and injecting low slump grout into the soils and rock. As the pressurized grout is injected, the pipe is withdrawn incrementally, creating a continuous column of grout. The high placement pressure allows more grout to be pumped into voids and soft softs, and less grout into the more competent materials. The intent of the program was to reduce the risk of future sinkhole formation by filling voids, and increasing the density of (compacting) the soils, thus improving the conditions that are conducive to sinkhole formation.

Two episodes of compaction grouting were performed, involving 82 individual grout points, and approximately 260 cubic yards of grout. Upon GTA’s recommendations, the owner also redesigned the open section roof drains to flow into a closed piping system that discharges directly into the adjacent SWM basin, and repaved the loading area in an effort to reduce the amount of surface water entering the sinkhole-prone area.